Supporting staff and students to achieve their full potential since 1968

Sign Languages are for Everyone! | by Mary Long, CENMAC Advisory Teacher

At CENMAC, we work with students with a wide range of needs and abilities, and our focus is always on finding personalised assistive technology solutions to suit each individual. For some of our students who have a hearing impairment, we have been investigating new technologies and how best to support communication.

This week to celebrate the International Week of the Deaf 2020 CENMAC are casting a spotlight on an innovative piece of technology which we will be trialing in schools. Hadeel Ayoub (Founder and CEO of Brightsign Technology) spoke to CENMAC about the development of the BrightSign Glove:

… I decided that I wanted to do something about this horrible situation, that people, both young and old, find themselves in – excluded from much of society and often unable to effectively communicate without the aid of an interpreter …

Nearly three years ago, I met a little boy named Kayden with his mother. He was completely deaf and couldn’t speak at all – not even to much of his family. His parents had been teaching him signs so that they could communicate with him, but at wider family events, such as his grandfather’s birthday, he wasn’t able to join in with any of the activities or play with the other kids. His mother told me then that she would do anything to help her son have a voice of his own. It was at that point that I decided that I wanted to do something about this horrible situation, that people, both young and old, find themselves in – excluded from much of society and often unable to effectively communicate without the aid of an interpreter, something that isn’t always desirable in many more intimate or private situations, such as when visiting a doctor.

I was in the process of selecting a subject to research for my PhD, and I immediately knew that this was what I wanted to do. I quickly developed a first prototype – it could only handle a few static signs, and it looked like more of a mess of wires than something that people could actually use, but when I had people try it out, I could see that what I was working on could have a place in this world, helping those that needed it the most.

Two years and many iterations of research and testing later, I had met my business partner, founded a company and had just received our first batch of finished gloves from our manufacturers. But those two years couldn’t have happened, without the help and support of so many – from mentors, to our test users. We knew that we should include our users in the design and development process right from the start – creating a product that doesn’t actually solve the needs or fit the requirements of those it is meant for would be a waste of time. So, we formed a close network of schools for those with special needs, early adopter users (and their parents), and assistive technology platforms and user groups, like CENMAC. Working with them, we gradually worked towards the product that we had dreamed of.

There were problems that we found that we had to work on that were obvious – things like translation, accuracy, and battery life. But there were also many things that we hadn’t and couldn’t have anticipated. Our younger users needed it to be able to be easily cleaned and they wanted to be able to customise it. Just offering one voice wouldn’t cut it – a voice can be a part of your identity, and so letting each of our users pick their own was important for giving them the confidence to go out and interact with their friends. But, we had more unusual requests as well – one family wanted their daughter to be able to sing using the glove. Another wanted to be able to travel with it, and have it translate for them, not just from their signs into English, but to any other language as well. 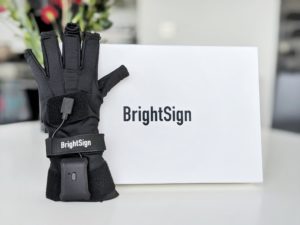 After all of that, however, we finally landed on our current solution – the BrightSign glove – a glove that can translate any sign, from any sign language (even one you’ve made up yourself), into any spoken language (right now we have over 30 different language options, and are working to add even more).

It can be used by anyone that has a disability that means that they can’t speak – whether that is non-verbal autism, deafness, throat cancer, or a stroke. Because we can translate signs that you’ve made up yourself, rather than just a predefined sign language, it means that those who have trouble learning traditional signs, or those who have encountered difficulties later in life can use it too, without needing to spend years learning a language like BSL (British Sign Language).

Our goal all along has been to create a tool that can help those who face the greatest difficulties in society become more included, less isolated, and as has been our motto since we started all of this – to give a voice to those who cannot speak.

To find out more about the BrightSign Glove visit www.brightsignglove.com or watch this short clip of Hadeel demonstrating how it works.

Don’t forget you can share your CENMAC experiences for our CENMAC family to enjoy.

You can find out more about which cookies we are using or switch them off in settings.

This website uses cookies so that we can provide you with the best user experience possible. Cookie information is stored in your browser and performs functions such as recognising you when you return to our website and helping our team to understand which sections of the website you find most interesting and useful.

Strictly Necessary Cookie should be enabled at all times so that we can save your preferences for cookie settings.

If you disable this cookie, we will not be able to save your preferences. This means that every time you visit this website you will need to enable or disable cookies again.

This website uses Google Analytics to collect anonymous information such as the number of visitors to the site, and the most popular pages.

Please enable Strictly Necessary Cookies first so that we can save your preferences!